Day 2 of spoiler season for Commander 2017 was all about the flying beasts. Dragons are the second tribe to get their day in the sun(unless you count their early leak which we covered here) and we’ll jump right into the new hotness! 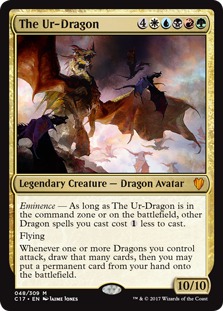 The big bad flying beast of the set. The Eminence ability is pretty nice, so don’t be surprised when people play this as their commander just to have a Dragonlord’s Servant effect all the time. The second ability is well worth the casting cost of Señor Ur-Dragon. Cheating things into play is always fun, along with drawing cards. The Ur-Dragon is big and expensive and I’m sure has lots of people excited. If you can handle the large casting cost then you’re going to be rewarded. 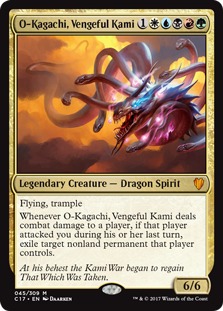 Another spicy 5-color dragon to lead your deck. I don’t really like that you can only exile permanents retributively but this is still a very powerful card. It’s a bit too political for me, but it’s never been a bad thing picking off your opponents stuff just for attacking with creatures. Trample makes sure that every time you attack with this monster you’re going to get triggers out of it though. 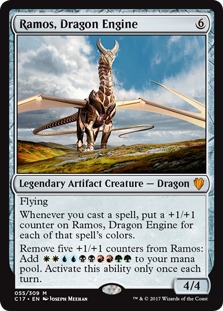 Ramos, Dragon Engine is a 5-color general that I can really get behind. Ramos grows just for playing the game so whether we want to just make a huge dragon or get rewarded with enough mana to cast Progenitus there is always lots to be doing here. There are sure to be lots of combo decks built around Ramos the Robot, some Storm players I’m sure will love the free mana they can generate as they go along. 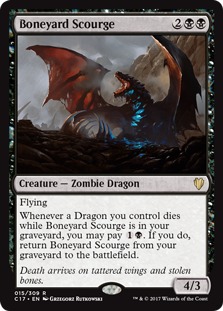 This is a pretty aggressive creature that always comes back for more. It’s probably a very good thing this doesn’t have haste otherwise it would probably do some real work in your local groups. Four mana for a four power flier is already pretty good and if you’re sacrificing your own creatures for gain then this is just gravy. The limitation on only when your own dragons die makes it a little less broad, but I think think this is a pretty sweet card. The zombie creature type also isn’t irrelevant either. 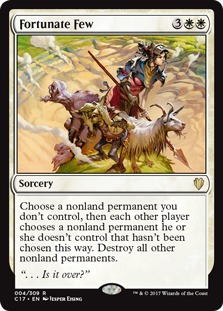 I don’t know why Wizards of the Coast insists on trying to fix Cataclysm. If it’s not broke, don’t fix it! But really, this new Tragic Arrogance-esque board wipe let’s everyone pick their poison. These types of politics I CAN get into, letting people choose what they think they can deal with. It’s probably worth noting that Fortunate Few destroys all the permanents instead of making the players sacrifice, so there are definitely some shenanigans to be had here. Kudos for the flavor text combined with the art. I definitely got a chuckle out of it. 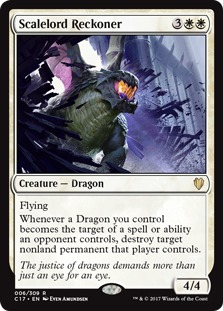 At first I thought this was a weird Mirrorwing Dragon effect, then I reread it and thought it was a Karmic Justice. Turns out I was wrong the whole time. All you need is to have one of your own dragons TARGETED only to pop one of their nonland permanents. It’s a great punisher mechanic that Jason Alt would love, since it punishes folks for doing things instead of keeping them from doing things altogether. If your creatures are predominantly dragons or you play Conspiracy this would probably be a very welcome addition to your deck. At the very worst it goes eye for an eye when your opponents get rid of it right away. 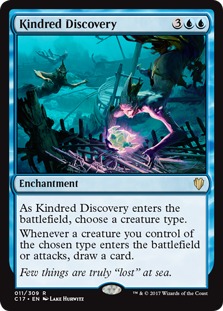 This card is great. Ignore the fact that you immediately draw your whole deck with The Locust God by naming “insect,” and just think of all the value you can get out of it! This is the type of card that my durdly Sygg, River Guide would love as a way to really draw some cards in an otherwise super-focused tribal deck. It’s not a “may,” trigger though, so you’re still in danger of drawing too many cards, but there is major potential here. 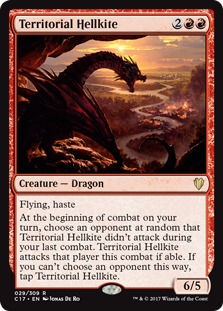 A 4-mana 6/5 hastey flier is nothing to sneeze at. It gets much worse as players are eliminated though, so if you’re left going mano e mano with someone you’re not going to get much of anything out of this one. I feel like I am in the minority here in not being a fan of this card as the other EDHREC staff seem to be fairly high on it. Also, is it just me or would Melee have been a great mechanic for this set? Everyone seems to be attacking everyone, which isn’t something Jackie Moon would like… 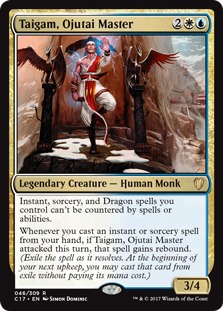 Daaaaaaaaaaaaang, Taigam finally gets a card and it is sweet! When we first saw this card as part of the early leaks I was jazzed, and I still am. This instantly jumps out to me as a less/more broken Narset, Enlightened Master. Sure the spells can’t be counters, but you have to cast them now. Giving everything rebound is crazy too. Dovescape just seems unfair here. I’m going to go out on a limb and say this is the first new commander that I personally build from this set. 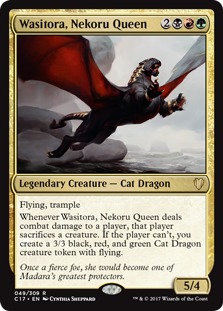 Wait, I thought cats were yesterday? No? Cat AND dragon? Well alright then. Another one of them flying and trample dragons too. I like this ability much more than some of the other “when X deals combat damage,” abilities in the set. The cost isn’t terribly inhibitive to be your commander either. Jund is already very good, so if you’re playing lots of ways to double your triggers or tokens you could have a very fun brew on your hands! 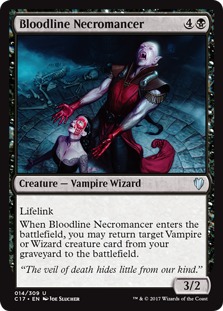 Wait, I thought vampires and wizards were supposed to be later? This is dragon day! But really, there are loads of other reanimation type spells out there so this just might blend in with the others. It does give you a blocker and like many other cards can be abused with Deadeye Navigator so there’s obviously potential. 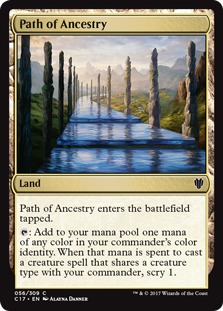 A Command Tower with upside. Entering the battlefield tapped is less than ideal, but giving you all the colors you need and giving you free scry’s each time you cast a creature seems pretty good. If you’re using Kindred Discovery this is a very good way to keep good cards flowing. My initial reaction was that this card is crazy. After returning to it, it seems like a very fun card that will often be followed up with telling your friends “you weren’t being very nice so now we get to play with your toy and you don’t.” Because apparently we talk like our moms did when we were six. Oh well. I still like the card. 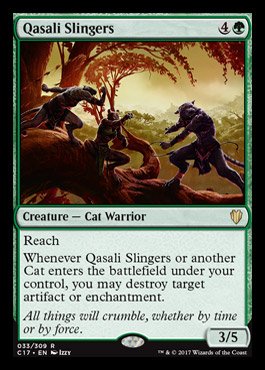 Oh those Qasali, their pridemages don’t do enough damage, so they decided to train up an Aura Shards on a pretty kitty. This card rewards you for going deep on the kitty-cats and will do lots to keep the board clear. For this kind of mana you probably can do better, but if you’re playing enough cats you’re sure to get some decent value out of it. Of course there is always White Sun’s Zenith too…

Mirror of the Forebears I’m not really sure what to make of this card. Surely the teams in R&D at Wizards talk to each other right? Mirage Mirror is a brand new card, and this just seems worse. Maybe you need one more druid for Gilt-Leaf Archdruid? I dunno, seems super blah to me. 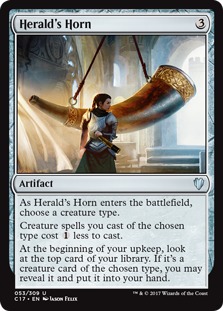 I like Descendant’s Path more than this, but there is a built-in cost reducer too. Much like most other cards in this set if you only care about one creature type then you are all set to go. 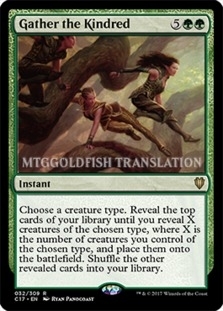 For seven mana you can get an even better Primal Surge since you don’t have to stop the process for hitting a non-permanent card. I really like this one as a way to steamroll out your deck and just go ham-crazy. Sure you don’t get to just put your entire deck into play like with Primal Surge but sometimes that’s not a bad thing. Plus at seven mana, you should probably be winning the game if this resolves anyways.

So there we have it, another day down! What new cards jump out at you all? Are there any decks that are going to be rebuilt with some new commanders like I’m probably going to do? Let us know in the comments what your favorite card from today was. Thanks!