Today I have the privilege of taking you through the white cards of Hour of Devastation! We’ll look at everything through the lens of Commander playability, so I’ll skip lots of the common/draft cards that you likely won’t ever see. Yada yada, disclaimers of my own opinions etc. 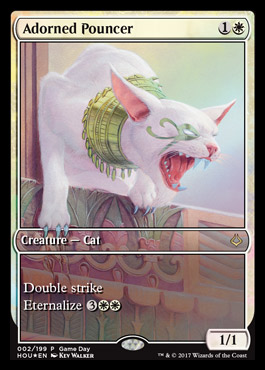 To feed off of Regal Caracal for the cat tribal decks, this feline jumps out as a decent token Eternalize later in the game. Token decks might make use of this too. If you want some extreme aggro as a 1-drop and a 5-drop, Adorned Pouncer isn’t the worst cat around. 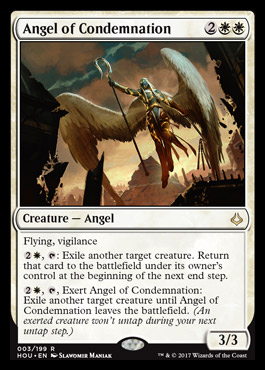 Angel of Condemnation is a flying Roon of the Hidden Realms. Vigilance is cool for sure too. I don’t think it’s quite as good as Eldrazi Displacer, since you have to tap it, but if someone played Angel of Condemnation against me instead I wouldn’t fault them one bit. The second ability to Banishing Light another creature is relevant too. I like it in decks that can untap it more often than every other turn, so Seedborn Muse will be its best friend. 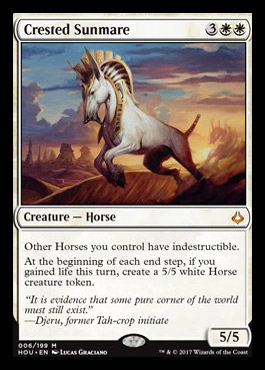 Horse. Tribal. I wish that’s all I needed to say, but dang this is cool! White never has issues with gaining life, so as long as you build your deck right you can get a stream of 5/5 horses EVERY TURN. Say what you will about White Knight only being a 2/2, but his horse is a 5/5. Crested Sunmare is awesome, and I am a fan. Period. You can be sure that someone is going to build horse tribal around this card. If you add in clone effects then you’re really going to mess up people’s days. 11/10, would neigh again. 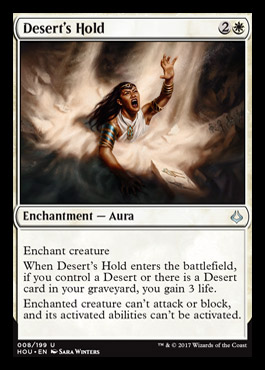 An Arrest with upside? Sure! An Arrest that triggers Crested Sunmare? Even better! 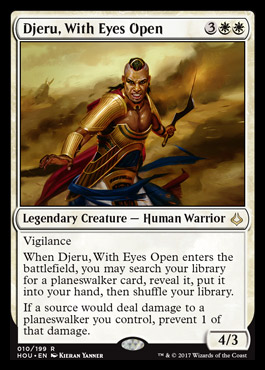 Djeru, With Eyes Open is automatically going in every Atraxa, Paretors’ Voice superfriends deck. That’s just science. Since Atraxa is famously the most built deck on EDHREC and planeswalker tribal is a very popular build, I think it’s safe to assume that you’ll be eyeing Djeru, With Eyes Open early and often at your local tables. Thalia’s Lancers comparisons make sense, only you’re getting a different kind of legendary. Adding 2 mana to Call the Gatewatch for a 4/3 body and softening the blows makes Djeru, With Eyes Open a welcome sight. 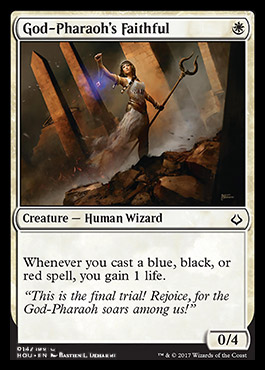 I only mention God-Pharaoh’s Faithful because it’s a way to trigger Crested Sunmare nearly whenever you want. It’s not the worst blocker, but I just really like Crested Sunmare… 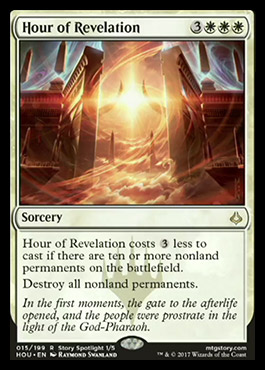 This card is sweet! If you remember what format we’re talking about here then you’ll know that you’re almost never going to cast Hour of Revelation for more than 3 white mana, and if you do, something is either going very wrong or very right depending on who you are. I like this card, being able to wrath all permanents for this cheap makes lots of other cards obsolete. Any decks I was playing Day of Judgement in probably will make this switch immediately unless it’s a deck that cares about my own non-creature permanents. 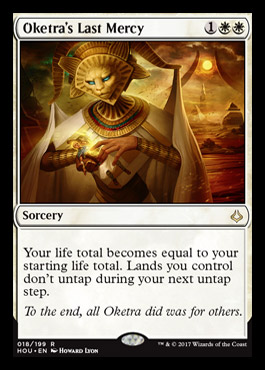 How is it that I get the boring card of this cycle? At least it can trigger Crested Sunmare. Seriously though, I don’t really know if this is worth the downside unless you’re playing Felidar Sovereign. And if you are, you probably have way more interesting things that do this effect. 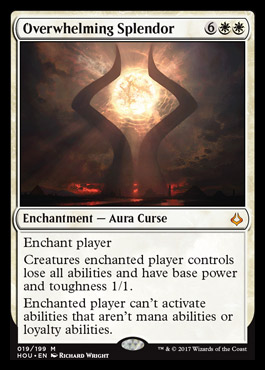 This card has me overwhelmed. With splendor. Seriously. A one-sided Humility is SUCH a hoser. I know it’s an unpopular opinion for an unpopular deck, but Overwhelming Splendor will make all your local Narset, Enlightened Master player super giddy. This also might be my new favorite target for Academy Rector too. This won’t make every game near as miserable as a regular Humility does either since it only effects one player too. Now you can shut down whoever is wrecking the whole table and play your battlecruiser Magic just as Sheldon Menery intended… 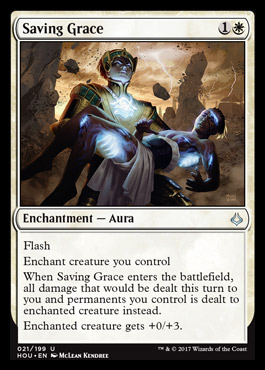 Saving Grace feels like the closest that white gets to an actual Fog effect (Endure is scarcely a Fog effect). An instant speed Pariah for all permanents seems fun enough. Slapping this on Stuffy Doll or one of my pet cards in Phyrexian Obliterator seems like something I’d be willing to try once or twice. 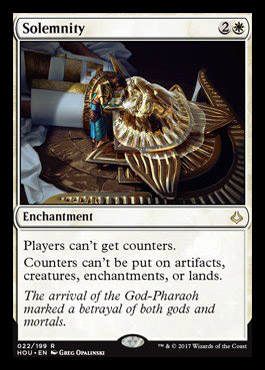 Talk about hoser…this might have generated more talk amongst the EDHREC authors than any other single card in the set. It has lots of potential to break many other cards. Decree of Silence has already jumped up in price since it makes it rather hard for opponents to cast spells after it comes down. It’s anti-infect if your local playgroup is into that sort of thing, and makes Woodfall Primus most upsetting to deal with as well. The list of cards goes on and on. Cumulative upkeep? Gone. Dark Depths? Whatever. I think this card might be the most played among the white cards in the set when all is said and done. I’m probably wrong, but Solemnity already caused a huge stir. 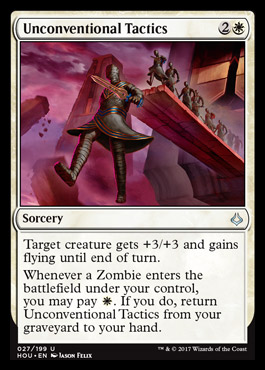 This isn’t the best pump spell ever, but I have a feeling that there are some aggro players looking to add some lasting power to their deck and will give Unconventional Tactics a shot. With zombies being white now there are sure to be some Esper-colored zombie decks being built. The art reminds me of the Lemmings video game I used to play as a kid, only I never got past level one. I just used a code to unlock everything and blow up the lemmings in the most fun ways possible. Also, this doesn’t trigger Crested Sunmare…

There we have it! Was there anything else that stood out to you that I missed? I intentionally left out all the nonsense commons and uncommons, what did you feel I slighted? Let me know!