Non-Basically Speaking — Kaalia of the Vast 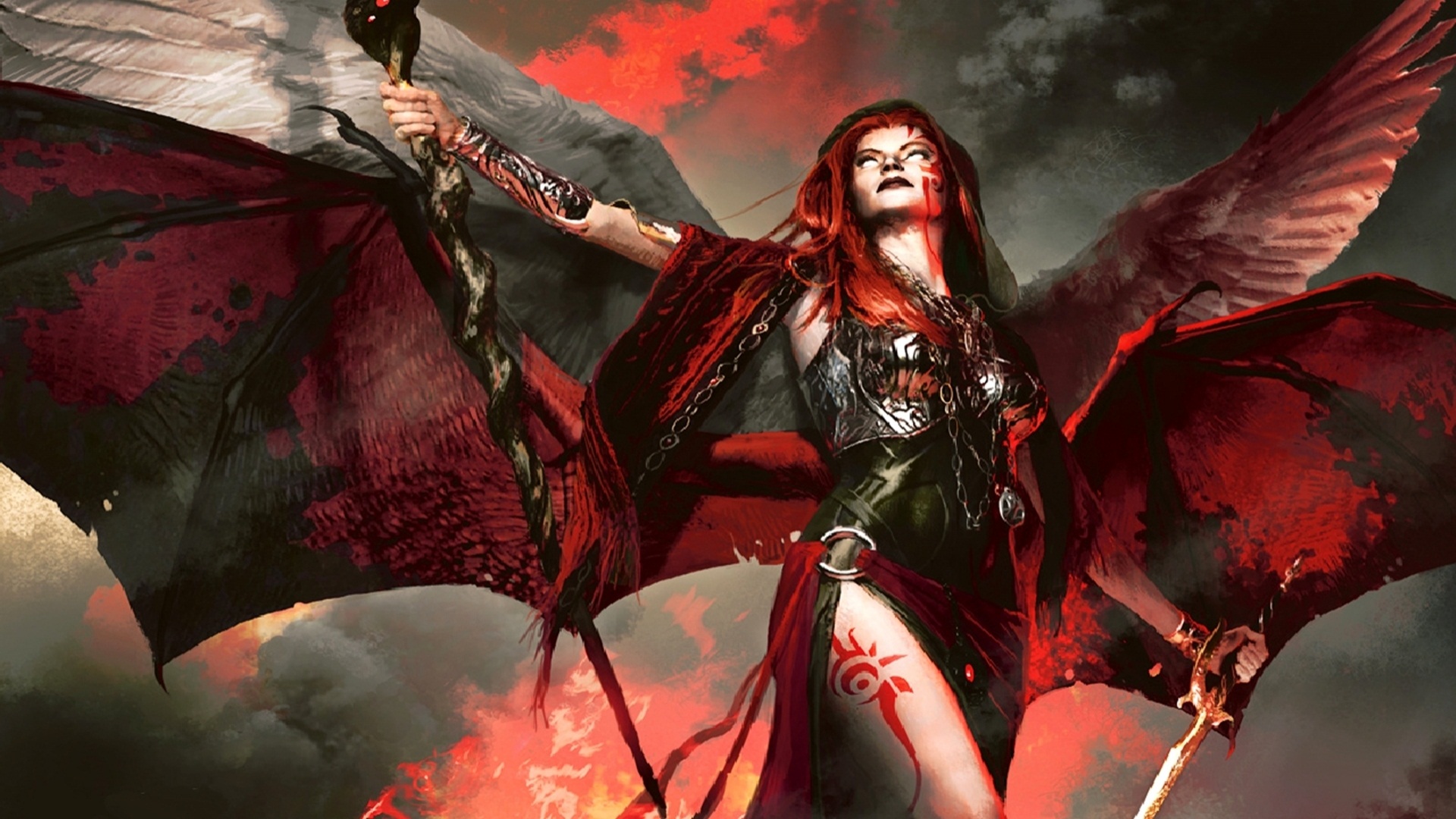 Hello friends, angels, dragons, and demons! Welcome back to EDHREC and our continuing biweekly column, Non-Basically Speaking, the series that strives to identify non-basic lands that should be considered valuable staples or hidden gems based on their visibility on EDHREC.

Kaalia of the Vast has long been an EDH favorite of Timmys everywhere who want to jam pack their Commander stack with the fattest and most notorious angels, dragons or demons in the game. Few Commander players are on the fence when it comes to their opinion of Kaalia. She is either admired or despised. Those that loath the Mardu Mistress commonly cite her predictable game plan, or her nasty reputation of brutal early game finishes as a source of their animosity. Opponents that have been locked out by an Iona, Shield of Emeria (68% of 1202 decks) naming their primary color or on the receiving end of a turn four sucker punch courtesy of Master of Cruelties (68% of 1173 decks) will know to zero in on Kaalia as soon as the game begins.

When we shuffle our EDH deck and escort Kaalia to our command zone, we might as well paint a bullseye on our forehead. With such a huge target on our head from the get go, we will need resources like EDHREC to ensure we have the best angels, dragons and demons to fight for our cause. However, that won’t be enough. We also need secondary strategies based on reanimation, control, removal, protection, or, gulp, land destruction to ensure our linear game plan is not thwarted. Even then, we could still benefit from an extra little edge in strategy derived from the synergy we can find in our utility lands. Let’s strengthen our cause and take a look at Kaalia of the Vast, Non-Basically Speaking.

The truth of the matter is, the best way to stymie a Kaalia of the Vast deck is to ensure the infamous commander is a non-factor by keeping her off the board. What better way to methodically increase the commander tax on Miss Vast than by slinging Counterspells and denying her access to the battlefield. Blue mages know that the best way to keep Iona, Shield of Emeria from neutering them is to keep those Island resources ready at all times.

As a Kaalia player, the struggle is real when we are up against the permissive strategies of blue. In a realm of control Cavern of Souls is essential to skirt around permission spells. With the Cavern available as a resource we can name the creature type “Human” and be able to cast our Lady of the Skies without the fear of blue denial. Cavern of Souls also assists in mana fixing by allowing us to use it for one mana of any color if we are trying to cast a human spell. With our safeguards versus the dark blue arts of countermagic in place, Mother of Runes (36% of 1195 decks) and Grand Abolisher (29% of 1187 decks) will also enjoy safe passage when summoned to our side of the board.

Mana ramp and haste enablers are key components of a Kaalia deck. Being able to drop Kaalia into play and send her right into the red zone can be the surge of power we need to force our opponents into submission. No Kaalia deck is complete without the inclusion of Lightning Greaves to give her haste and shroud. EDHREC stats verify that 83% of Kaalia players know to include her fashionable shin-wear in the 99. With that being said, adding in some redundancy to ensure that we can give our commander haste is always a wise deck building decision. For that reason, we can include Hall of the Bandit Lord (34% of 1180 decks) as a haste enabler to get Kaalia swinging right out of the gate. At first glance the Hall seems less than desirable as it enters the battlefield tapped and only produces one colorless mana if we pay 3 life. Looks can be deceiving, however, because the intimidation and raw power of launching Kaalia into battle with Hall of the Bandit Lord is well worth the life loss repercussions.

Vault of the Archangel is an interesting selection and fairly well recommended by EDHREC (35% of 1192 decks). The Vault gives our entire team deathtouch and lifelink which telegraphs to our opponents that the battlefield’s skies belong to us. We previously discussed being the target of our opponents’ hatred of our Mardu Sweetheart, so using lifelink as a first-aid kit to our life total can swing games back into our favor. However, if we find ourselves in a position where our deck needs to concentrate more on mana fixing or we need a few different utility options, we could definitely replace the Vault in favor of other options. With that being said, let’s leave the responsibility of life gain to our Baneslayer Angel (42% of 1202 decks) and take a look at some hidden gems, or to be on theme, hidden dragon eggs, that you won’t find on EDHREC.

There is an ample amount of recommendations on EDHREC for non-basic utility lands and unfortunately, I only have time to mention a few throughout the course of this article. Let’s move on take a gander at some hidden gems I believe would be a better fit for us in lieu of some recommendations that you can find within the tome of Kaalia’s EDHREC page. First, we could take a look at replacing Rogue’s Passage (19% of 1186 decks). While this land’s ability to make Kaalia unblockable is a fantastic option to punch through enemy lines it also costs four mana and tap to activate. A less mana intensive option to consider is Shizo, Death’s Storehouse. This haunted dark moor of Kamigawa is a black mana source that can be used to give a legendary creature fear. By activating Shizo, we can make it so Kaalia can only be blocked by artifact or black creatures. The best part about this former verdant field of wildflowers is that it does not enter the battlefield tapped. For all intents and purposes, the Shizo takes the place of a basic Swamp in our deck building.

Since protecting Kaalia is of the utmost priority and there is an entire cycle of Kamigawa legendary lands, why not throw Shinka, the Bloodsoaked Keep and Eiganjo Castle in place of a basic mountain and plains respectively? While first strike and prevent two damage may not be as useful as the fear ability from Shizo, there could be times that Kaalia, Gisela, the Broken Blade, Aurelia, the Warleader or one of our other legendary angels, dragons or demons may need these niche abilities to survive combat.

Throughout the course of an EDH game our creatures will die in combat or meet their demise courtesy of board wipes such as Wrath of God or targeted removal like Putrefy. Heck, it could be our fault that our best angels, dragons and demons are in the graveyard. Maybe we cycled our hand with Dragon Mage or sacrificed our Balefire Dragon (68% of 1193 decks) to Disciple of Bolas to draw six cards. Regardless, on whether or not we are running a recursion strategy, Volrath’s Stronghold provides essential utility to get our creatures back to our hand so Kaalia can cheat them back into play during our combat step. With a sacrifice outlet we could set up a situation to abuse Angel of Despair (69% of 1202 decks) or Rune-Scarred Demon (77% of 1194 decks) every turn by using Volrath’s Stronghold to put the card from our graveyard on top of our library.

I would be remiss in ending this article without mentioning Homeward Path as an answer to our opponents’ answers. Kaalia decks have tantalizing targets for spells and abilities like Bribery or Sepulchral Primordial. Worse yet, a scorned opponent may use control cards like Treachery or Gilded Drake to kidnap Kaalia and hold her for political ransom. Homeward Path ensures that our big threats and our Dega Diva are kept safe and secure from the shady actions our opponents may try to pull.

Before I go, how about one more non-basic land recommendation and a decklist? Okay great! Mistveil Plains is a white mana source that has the ability to put a card from our graveyard on the bottom of our library as long as we control two or more white permanents. While this may seem ho-hum in average Kaalia builds, this is sweet hidden tech in a deck that runs Sunforger. If a scenario calls for Utter End and it is sitting in our graveyard, we can slide it back into our library with Mistveil Plains and activate Sunforger to cast it without paying the mana cost. Rinse and repeat as the situation dictates. Better yet? Mistveil Plains has the Plains sub-type so we can dig it out of our library with a fetch land such as Arid Mesa.

That’s all I have for you today my EDHREC friends! What do you think? Do you like or despise Kaalia? What are some of your experiences playing with or against this infamous commander? Let’s discuss in the comments below!

For the decklist seekers, here is my Kaalia Sunforger-Scepter list chock-full of EDHREC favorites but with a Wally D. twist of jank and uniqueness. Enjoy!